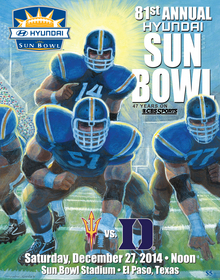 In a game with 792 yards of combined offense, it was an interception by Arizona State’s (10-3) defensive back Kweishi Brown that sealed a 36-31 victory for the Sun Devils over Duke (9-4) in the 81st Hyundai Sun Bowl on Saturday, Dec. 27 in El Paso, Texas.

Duke had the ball with under a minute remaining at the ASU 14-yard line and threw the ball to the corner of the end zone but the pass was intercepted by Brown.

The Sun Devils picked up their 10th win of the year in front of 47,809 for their second-straight Sun Bowl appearance, defeating Purdeu, 27-23, in 2004. Senior quarterback Taylor Kelly highlighted the ASU offense with 240 yards passing and 24 yards rushing for 264 of total offense. After the 81st Hyundai Sun Bowl, Kelly becomes the third player in ASU program history to tally 10,000 yards of total offense with 10,223 yards.

Duke trailed 30-17 heading into the fourth quarter but battled back scoring 14-points in the fourth to take their first lead of the game with 5:03 remaining in the game. The Blue Devils took possession on an ASU turnover, but turned it over on downs with 9:22 left in the fourth after the Sun Devils attempted to gain a first down on 4th-and-1.

The Blue Devil offense was forced to punt at the 50-yard line but pulled off a fake punt using a 30-yard pass from punter Will Monday to wide receiver Johnell Barnes moving the ball down to the 20-yardline to keep the drive alive. That play led to a 12-yard touchdown pass from wide receiver Jamison Crowder to wide receiver Issac Blakeney. Crowder received a toss from quarterback Anthony Boone before passing the ball to Blakeney giving Duke its first lead of the game at 31-30 after the PAT.

The Sun Devils immediately responded with a 96-yard kickoff return by true freshman Kalen Ballage, who ended the game as the John Folmer Most Valuable Special Teams Player. ASU running back freshman Demario Richards, who was named the C.M. Hendricks MVP, scored on the very next play, catching a pass from Kelly. The two-point conversion was unsuccessful making it a 36-31 game with 4:45 remaining on the clock.

Duke’s Shaquille Powell had a productive day with 117 yards rushing on 29 attempts, while adding 52 yards on three receptions with one touchdown. It was his first career 100-yard game and tallied a career-best 169 total yards in the game.

ASU came out on fire, scoring on its first drive of the game after getting the ball on the Duke 49-yardline. The Sun Devils used just five plays in a minute and 33 seconds as Richard followed the right guard into the endzone from nine yards out.

After the Blue Devils went three-and-out on their second drive of the game, ASU put up another three points on a 28-yard field goal by Zane Gonzalez to take a 10-0 lead with 10:50 left in the first quarter. The Blue Devils would get on the board in the first quarter as place kicker Ross Martin hitting a 40-yard field goal with 2:59 left. Duke started the drive at its own 35 heading down to the ASU 22-yardline, while eating up four minutes and 33 seconds off the clock.

ASU extended its lead by 10 with 12:55 on the clock in the second quarter as Gonzalez hit a 38-yard field goal. The Sun Devils had momentum but a sack by Duke on 3-and-4 for a 12-yard loss forced the field goal attempt. Gonzalez finished the game with 12 total points off three field goals and three PATs, tying No. 4 for all-time scoring for a kicker in Hyundai Sun Bowl history.

The Sun Devils decided to go for it on 4th-and-1 at the Duke 12-yard line and Kelly ran the ball up the middle for an 11-yard gain before Richard ran the ball in from 1-yard line. The point after gave ASU a 20-3 lead. Duke responded using an 8-play, 78-yard drive to pull back to within 10. The Blue Devils scored on a 14-yard pass from Anthony Boone to Powell. With 2:06 on the clock, Powell had already posted a career-high 96 total offensive yards.

ASU was held to its first 3-and-out of the game and punted the ball 43-yards down to the Duke 32-yardline. Blue Devil punt returner Crowder returned the ball 68 yards for a touchdown to make it a 20-17 ballgame. The 68-yard punt return was the longest punt return since North Carolina’s Marcus Wall returned a punt for 82 yards against Texas during the 1994 Sun Bowl.

The Sun Devils opened the second half scoring on an eight-play, 75-yard scoring drive that was capped off by an 11-yard TD pass from Kelly to Richard. It was Richard’s third score of the game, giving ASU a 27-17 lead with 11:08 remaining.

Duke was driving down the field and completed a pass to Blakeney on 3rd-and-14 but the ball was stripped by ASU defensive back Kweishi Brown with the fumble recovered by Jordan Simone at the 7-yardline. The ball was returned to the ASU 36-yardline and the Sun Devils eventually scored on a 47-yard field goal by Gonzalez to make it 30-17 game.

The Blue Devils pulled to within six points at 30-24, when Boone threw a 14-yard touchdown pass to Barnes with the PAT made by Martin. It was Barnes’ first career-touchdown.