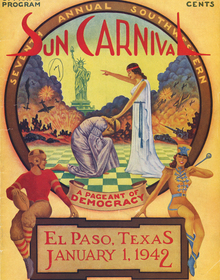 The winning Tulsa score came with just two minutes left in the game. Glenn Dobbs managed a 25-yard strike to Saxon Judd for the game-winning touchdown.

Dobbs was the star of the game with his great passing attack for Tulsa. Tulsa shattered every Sun Bowl passing record in this game, as the Hurricane completed 24 of 39 passes for 239 yards.

Tulsa’s roster also featured Bobby Dobbs, Glenn’s brother. Glenn would later play in the NFL and coach at Tulsa. Bobby transferred to Army, where he graduated in 1946. Bobby would go on to serve as an assistant at Army under Red Blaik with Vince Lombardi. Bobby served as a head coach at Tulsa, UTEP and Calgary of the CFL.

Glenn completed 20 of 31 passes for 201 yards, while Tulsa’s Saxon Judd pulled in nine catches. He was named to the national All-Bowl Team for his efforts.

First year head coach Henry Frnka and his Golden Hurricanes won their first ever bowl game appearance and finished the season 8-2. The Sun Bowl victory would be the first of five straight bowl game visits. Under Frnka’s leadership, the Golden Hurricanes posted a 40-9-1 record, won three titles, and outscored opponents 1,552 to 375. The following year after the Sun Bowl, Tulsa finished the season ranked 4th in the nation, the school’s highest mark ever. An explosive passing offense was his staple and his teams led the nation in that category in 1942 and 1944.