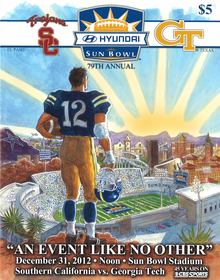 EL PASO, Texas (AP) – Georgia Tech needed a waiver from the NCAA to play in the postseason, and it made the most of its second consecutive trip to the Hyundai Sun Bowl.

Tevin Washington threw a touchdown pass and ran for another score to help the Yellow Jackets beat Southern California 21-7 on Monday.

Washington’s 1-yard touchdown run in the third made it 14-7, and he found Orwin Smith for a 17-yard touchdown pass in the fourth in front of a crowd of 47,922 at Sun Bowl Stadium.

“I’m really proud of our football team,‘’ Georgia Tech coach Paul Johnson said. "I thought that they showed up and played with a lot of heart and a lot of determination, and I know Southern California has some really good football players. It was a hard-fought game.’’

The Yellow Jackets rushed for 294 yards on 63 carries while stopping a seven-bowl losing streak. They also erased some of the sting from last season’s Sun Bowl, when they squandered a 24-10 fourth-quarter lead in an overtime loss to Utah. They also could have won the game on a field goal at the end of regulation, but missed for the third time in the game.

Georgia Tech needed a pass into the bowl season because it finished with a 6-7 record following a loss in the ACC championship game. The conference’s rules prevented Georgia Tech from falling to a lesser bowl, but it looked just fine competing against the disappointing Trojans.

“I’m just glad we got the win,’’ Washington said.

Southern California (7-6), which was ranked No. 1 at the beginning of the season, played without injured quarterback Matt Barkley. Max Wittek tossed a 9-yard touchdown pass to Silas Redd in the second quarter, but also threw three interceptions.

“It was a really surprising day,‘’ Southern California coach Lane Kiffin said. "Coming down and turning the ball over, and with third-down efficiency, we really found no rhythm on offense. I thought we’d play much better on offense today. The storyline really came down to our inefficiency on offense, and obviously it starts with the head coach.’’

USC became the first preseason No. 1 team to lose six games. It’s also all but assured of becoming the school to enter the season on top of The Associated Press poll and finish unranked since Mississippi in 1964.

Barkley, the first three-time captain in USC history, injured his right shoulder in a loss to UCLA and was not cleared to play his final college game. He clapped as the Trojans took the field for their first bowl game after a two-year NCAA ban.

Talented receiver Robert Woods was limited to three receptions for 33 yards in what was likely his final college game. The junior said after the loss he plans to enter the NFL draft.

Kiffin said he took responsibility for the lost season.

“All of it,‘’ he said. "We can’t be 7-6. That’s not USC, and that’s not our expectations. That’s not why we came here. Obviously, we have some work here to get that fixed.

“Even if we’d won this game, we’d still be very disappointed in this season. It’s well below our standards.’’

Asked if he thought the loss could cost him his job, Kiffin answered flatly, "No.’’

Tech’s David Sims had 99 yards on 17 carries, but he got plenty of help. Zach Laskey added 60 yards on six carries, Vad Lee had 52 on 10 carries and Washington had 16 attempts for 46 yards for the No. 4 rushing team in the nation.

Sims also caught a 3-yard touchdown pass from Lee in the first quarter.

Lee and Washington combined to go just 5-for-10 passing, but two completions went for TDs passes and two more covered 26 and 49 yards, keying two of the team’s scoring drives.

Tech used its two-quarterback attack masterfully, working them in and out of the lineup and playing to their strengths.

“I think both guys did some good things,‘’ Johnson said. "Vad hit some big plays and played well, and then in the second half we got kind of more geared into the run game and Tevin has a lot of experience and handled it really well.’’

High-powered USC finished with 10 first downs and eight punts as Georgia Tech shut down the Trojans’ big-play threats all afternoon.

USC receiver Marqise Lee, who finished fourth in this year’s Heisman voting, was held to six catches for 41 yards.

“To go out and perform the way we did today was a great feeling,‘’ said Yellow Jackets cornerback Rod Sweeting, who had an interception and was the game’s MVP.

Wittek had four passes deflected at the line. His second interception came in the Tech end zone with 6:22 to go and the last came inside the Tech 10-yard line in the game’s final minute. He was 14 for 37 for 107 yards.

“It was definitely our best game of the year (defensively),’’ Johnson said.

Georgia Tech cornerback Rod Sweeting was the game’s C.M. Hendricks Most Valuable Player of the game. Defensive back Jamal Golden was named the John Folmer Most Valuable Special Teams player, while junior Jay Finch was selected as the Jimmy Rogers, Jr. Most Valuable Lineman.