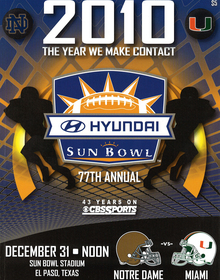 Freshman Tommy Rees passed for 201 yards and two touchdowns to Michael Floyd as Notre Dame beat Miami 33-17 in the Sun Bowl on Friday, making Kelly the first Fighting Irish coach to win a bowl game during his first season.

After a 20-year break, it was all Irish in the latest installment of a storied rivalry that became known during the 1980s as Catholics versus Convicts.

Notre Dame (8-5) reached the end zone on three of its first four possessions. Rees tossed TD passes of 3 and 34 yards to Floyd and Cierre Wood broke free on a 34-yard scoring run before David Ruffer added field goals from 40, 50 and 19 yards.

The Hurricanes trailed 30-3 going into the fourth quarter, completing a season in which their coach was fired with an ugly loss.

Rees hardly looked like a freshman, completing 15 of 29 attempts without an interception. He struggled in the season-ending victory over USC but his performance against Miami marked the first time a first-year starting quarterback at Notre Dame won a bowl game.

Floyd had a big day, too, with six catches for 109 yards receiving, and he was close to hauling into to more scores.
The game sold out in 21 hours, the fastest in the Sun Bowl’s 77-year history, and the crowd of 54,021 set a bowl attendance record. Many fans wore Notre Dame jackets to ward off the 34-degree weather as a round of overnight snow dusted the Franklin Mountains.

The warm-weather Hurricanes – many wearing head covers under their helmets – struggled much of the afternoon.
Miami scored twice in the fourth quarter when Stephen Morris threw a 6-yard TD pass to Leonard Hankerson and a 42-yard scoring play to Tommy Streeter, but it was too late by then. The Hurricanes also had 10 penalties for 106 yards.

The Canes trailed 27-0 late in the first half and the player with the most catches from a Hurricanes quarterback was Irish safety Harrison Smith, who intercepted three passes. Robert Blanton also had an interception during Miami’s turnover binge.

Not everything went perfectly for Notre Dame. Ruffer was wide right a 36-yard try late in the third quarter, his first miss on 24 career attempts. Linebacker Manti Te’o sat out most of the second half with a knee injury but could have played if needed.

Jacory Harris started at quarterback for the Canes after Morris sprained an ankle in practice this week. Harris couldn’t get anything going, completing just 4 of 7 with three interceptions. Morris took over the second quarter and finished 22-of-33 for 282 yards passing with two TDs.