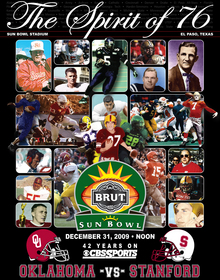 The combination of Landry Jones and Ryan Broyles was almost unstoppable for the Oklahoma Sooners.

And while OU’s steely defense couldn’t quite stop Toby Gerhart, yards were hard to come by for the Heisman Trophy runner-up.

Jones took over as Oklahoma’s quarterback after 2008 Heisman Trophy winner Sam Bradford was injured in an opening loss to BYU.

Broyles finished with 156 yards receiving and set Oklahoma’s single-game record with 13 receptions in front of a Sun Bowl record crowd of 53,713. Broyles was named the C.M. Hendricks Most Valuable Player and the John H. Folmer Most Valuable Special Teams Player for his efforts. He is the first player in the history of the game to win both awards.

Jones found Broyles on TD strikes of 30, 13 and 6 yards, and the Sooners led for good at 31-24 after DeMarco Murray flipped across the goal line late in the third quarter.

The victory capped an injury-plagued season that opened with national title hopes, but coach Bob Stoops said he was proud that the Sooners (8-5) never quit.

Gerhart, who led the nation with 1,736 yards rushing, ran for 135 on 32 carries and scored two TDs in the first half in what was his final game for Stanford.

Oklahoma rallied with 14 straight points in the third quarter, then held on after Patrick O’Hara missed a 32-yard field goal try with 3:19 remaining. Stanford (8-5) got a final opportunity but turned it over on downs, starting a celebration for fans wearing crimson and cream.

The Cardinal pulled to 31-27 on a 22-yard field goal by Nate Whitaker, capping a series that began when Broyles mishandled a punt. Oklahoma protested because Stanford’s Johnson Bademosi hit Broyles just as the ball arrived, but officials gave possession to the Cardinal.