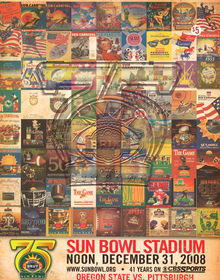 In the lowest-scoring major bowl game in a half-century, No. 24 Oregon State shut down No. 18 Pittsburgh 3-0 in the Brut Sun Bowl on Justin Kahut’s 44-yard field goal late in the first half.

The defensive struggle included 20 punts and nine sacks. Pitt kicker Connor Lee tried a 58-yard field goal in the closing minutes but the ball, helped by a steady wind, dropped just short of the crossbar.

Not since Air Force and TCU played to 0-0 standoff in the Cotton Bowl on Jan. 1, 1959, had a bowl produced so few points.

It was the lowest-scoring Sun Bowl since a scoreless tie in 1940 between Catholic and Arizona State.

Pitt, making its first bowl appearance since the 2004 season and the first under coach Dave Wanndstedt, led the Big East in scoring this season, averaging 29.3 points per game.

But there was no sign of offense this time, not with standout tailback LeSean McCoy held to 85 yards rushing. Quarterback Bill Stull was 7-for-24 for 52 yards with one interception.

The Beavers played without their spectacular brothers, tailback Jacquizz Rodgers and receiver James Rodgers, both out with shoulder injuries.

Reserve tailback Jeremy Francis had 76 yards rushing and Lyle Moevao was 21-for-42 for 193 yards passing with two interceptions. The Beavers finished with 273 total yards and rebounded from 65-38 loss to rival Oregon that denied them a Rose Bowl berth.

The Panthers finally got a spark early in the fourth quarter when T.J. Porter returned a punt 36 yards to Oregon State’s 42.

But three plays later, the big return was wasted because Oregon State’s Victor Butler, who had four sacks, stripped Stull and recovered the fumble.

Oregon State led 3-0 after Kahut connected on his field goal with 2:18 remaining before halftime. He later missed a 37-yard attempt midway through the third period.

The Beavers came up empty on the best touchdown opportunity by either team. Officials ruled tight end John Reese was out of bounds on an apparent 9-yard TD reception 10 seconds before the break.

The call was upheld after a replay review, and on the next play, Pitt linebacker Scott McKillop – the Big East defensive player of the year – intercepted Moevao’s pass in the end zone.