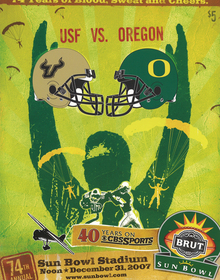 USF rose to as high as No. 2 in Week 7 of the season after a 6-0 start. Oregon reached the same pinnacle in Week 11. Both teams suffered three straight losses before rebounding to get to El Paso.

The difference in the game was the Jonathan Stewart Road Show, which preempted the Oregon Air Attack and USF had no answer, despite having the nation’s top defensive end in George Selvie.

Stewart ran has way to the C.M. Hendricks Most Valuable Player Trophy after setting a Sun Bowl record for rushing yards (253) and all-purpose yards (282). Stewart averaged 11 yards per carry and busted loose for a 71-yard touchdown that gave the Ducks the lead for good in the second quarter.