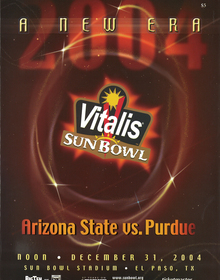 The largest crowd in Sun Bowl (51,288) history watched as BCS No. 19 Arizona State held off a late rally by Purdue and quarterback Kyle Orton.

Orton is the first quarterback in Sun Bowl History to start in three games (2001, 2002 and 2004). Orton finishes his collegiate career with 983 passing yards in his three Sun Bowl appearances.

The C.M. Hendricks Most Valuable Player Award went to Arizona State quarterback Sam Keller, who threw for 370 yards in his first collegiate start.

The award could have easily have gone to running back Rudy Burgess, who racked up 200 all-purpose yards and scored the game-winning touchdown with just seconds remaining. Burgess, an all-purpose player, who had seen time at wide receiver, running back and defensive back was thrust into the starting role just days before the Sun Bowl.

This was a game that went back and fourth in the second half after a field goal and safety gave Arizona State a 3-2 lead at the half. But the second half was a different story as the lead changed hands six times.

The Jimmy Rogers, Jr. Most Outstanding Lineman Trophy went to Purdue’s Brandon Villarreal, who recorded seven tackles, four for a loss, one quarterback sack, two quarterback hurries and a safety. The John H. Folmer Outstanding Special Teams Trophy went to Purdue Punter Dave Brytus, who averaged 48.9 yards punting and landed four inside the ASU 20-yard line. Only two of his eight punts were returned for a total of 11 yards.