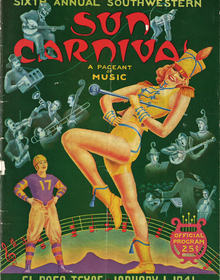 Western Reserve pulled off a come from behind victory in the fourth quarter to beat Arizona State, who was making its second consecutive trip to the Sun Bowl, 26-13.

Arizona State’s Hascall Henshaw ran 94 yards for a touchdown. At one point he was even backed into his own endzone. That play stood as an NCAA record for 13 years. Henshaw finished the game with 147 yards rushing.

ASU countered with a 14-yard touchdown pass from Joe Hernandez to Wayne Pitts and Henshaw’s record-breaking 94-yard touchdown run. The Sun Devils went into halftime with a 13-7 advantage.

In the third quarter, Arizona State was deep into their own territory and opted to punt. An offsides penalty was called on both teams after Pitts’ kick was partially blocked. Arizona State would re-kick. Western Reserve’s Willis Waggle completely blocked the second attempt and wrestled the ball away from Pitts for a three-yard touchdown run to tie the game at 13-13.

During the opening play of the fourth quarter, Western Reserve’s Johnny Ries ran for 54 yards to the ASU nine-yard line. Ries followed with a touchdown and gave Western Reserve their first lead of the game. After a successful Skoczen extra point, the score was 20-13.

ASU’s subsequent drive was sparked by a 39-yard pass interference call that put the ball on the Western Reserve 14-yard line. However, ASU gained only two yards before turning the ball over on downs.

Late in the fourth quarter, Ries converted a fourth-and-one down to the ASU 3-yard line. Ries followed with a double–reverse run into the endzone for a 26-13 final.

Belichick would go on to coach collegiately for years, including 34 years at Navy.

Western Reserve’s head coach Bill Edwards was later inducted into the College Hall of Fame in 1986.