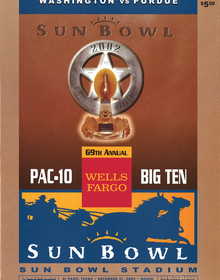 Purdue withstood a 17-point first half deficit to knock off Washington, 34-24, in the 69th edition of the Wells Fargo Sun Bowl.

After trailing 17-0, Purdue scored 34 unanswered points, including a pair of defensive touchdowns on two Washington fumbles. This game marked the first time in Sun Bowl history that three fumbles were returned for scores.

After racking up a quick 94 yards in the first quarter, Purdue’s defense stifled the Husky offense, holding Washington over 100 yards below their season average. Washington finished the day with 316 yards of total offense.

Washington quarterback Cody Pickett set a Sun Bowl records by completing a pass to 11 difference receivers in the game. He finished the day 25 of 54 for 2723 yards, with two touchdowns and one interception.

The Huskies also seemingly shot themselves in the foot, as Washington set a then Sun Bowl record for most penalties (13) and most penalty yards (118). The penalty record was previously held by Texas Tech vs. Pacific (12) in the 1952 Sun Bowl. The penalty yardage record was previously held by Southwestern vs. Mexico University (109) in the 1945 Sun Bowl.