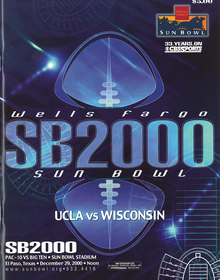 In a rematch of the 1999 Rose Bowl, Wisconsin and UCLA squared off in the 67th edition of the Wells Fargo Sun Bowl.

The attendance of 49,093 was the seventh largest crowd in Sun Bowl history and 13th largest football crowd at Sun Bowl Stadium.

Wisconsin junior Michael Bennett was named the John Folmer Most Valuable Special Teams Player; Bennett rushed for 83 yards on 16 carries with one touchdown and had two kickoff returns for 79 yards, including one that resulted in the touchdown that pulled the Badgers to within six points midway through the third quarter.

Bennett then added the game-deciding score in the fourth quarter on a six-yard run to give Wisconsin a 21-20 lead.