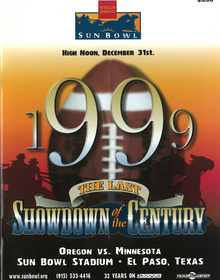 The 1999 Sun Bowl marked the third time Minnesota and Oregon met. The game was Minnesota’s first bowl game since 1986 and the Gophers came in ranked 12th in the AP poll. It was Oregon’s eighth bowl appearance in its last 11 years. The Ducks’ last bowl win came in 1997 at the Las Vegas Bowl. The 48,757 in attendance was seventh-best recorded crowd in Sun Bowl history at the time.

Oregon scored with 1:32 left to go in the game when Joey Harrington completed a 10-yard pass to Keenan Howry in a 12-play, 87-yard drive. Minnesota had a 20-17 advantage when Billy Cockerham connected with Ron Johnson for a 7-yard pass to open the fourth quarter.

The edge-the-seat nail biter was Oregon’s fourth come-from-behind victory in the final minutes of the game.

Minnesota arrived to the Sun Bowl ranked 11th in the nation in rushing offense, but was held to only 96 yards against the Oregon defense. The Golden Gophers still finished with a new school record of 2,726 yards.

By the second half, the Oregon offense was able to wear out Minnesota’s eighth-ranked scoring defense.
Minnesota quarterback Billy Cockerham was named the C.M. Hendricks Most Valuable Player after he tied the Sun Bowl record by passing for three touchdowns.

Minnesota cornerback Tyrone Carter was the 1999 Jim Thorpe Award Winner as the top defensive back in the nation — finished with 18 total tackles, including eight unassisted tackles in the game, he established a new NCAA record for all-time solo tackles with 405.

Minnesota’s Ron Johnson tied the record for touchdown receptions with two and set a Minnesota season record for sophomores with seven receptions.