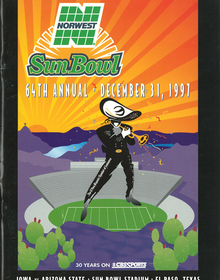 Arizona State (9-3) relied on Steve Campbell, a career backup quarterback making his first collegiate start, running back Mike Martin, and its defense to completely dominate an Iowa Hawkeye team that came into the game averaging 424 yards and 37 points per game.

Martin, the C.M. Hendricks Most Valuable Player, rushed for a personal best 169 yards on 27 carries and scored on a one-yard run to allow Arizona State to control the tempo of the game and take pressure off Campbell.

The powerful Iowa offense managed just one score, a 26-yard touchdown pass with only 49 seconds remaining in the game, when Randy Reiners found Richard Carter. The Sun Devil defense stopped the Hawkeyes on fourth down attempts on three consecutive series in the second half.

Iowa’s Jason Baker was the recipient of the John Folmer Most Valuable Special Teams Player award after returning two kickoffs for 44 yards and four punts for 16 yards.

Iowa wide receiver Tim Dwight was a consensus All-American for the 1997 season.

Arizona State also featured All-American linebacker Pat Tillman, who was inducted into the Legends of the Sun Bowl in 2004. Tillman finished the game with eight tackles (four solo), a half of a sack, one pass breakup and three quarterback hurries.