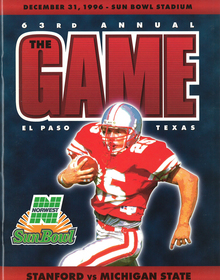 In the second largest shutout in Sun Bowl history, the Stanford Cardinals thrashed the Michigan State Spartans, 38-0.
The teams were led by a pair of up-and-coming head coaches – Tyrone Willingham (Stanford) and Nick Saban (Michigan State).

For most of the first quarter, the game was marked by fumbles, interceptions and penalties, and the contest was scoreless.

Then, with 2:06 remaining in the first quarter, Stanford’s Josh Madsen intercepted a pass on his own 21-yard line, ran 29 yards to midfield, and lateraled to Leroy Pruitt, who ran the remaining 50 yards for the first score of the game.

After that, Stanford controlled the game in every area: offense, defense and special teams.

In the second quarter, Jon Ritchie pulled in a Chad Hutchinson pass to extend the lead to 14-0. Adam Salina then plunged into the end zone from one yard out to give the Cardinal a 21-0 lead heading into the break.

The Cardinal extended the lead in the third quarter with a Kevin Miller field goal and a 27-yard touchdown scamper by Damon Dunn.

Jeff Allen scored from nine yards out on a blocked punt to close out the scoring.

Stanford defensive end Kailee Wong had 10 tackles and two sacks to be the named Jimmy Rogers, Jr. Most Valuable Lineman.