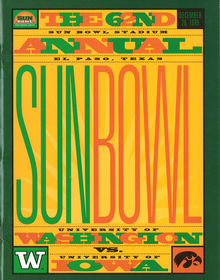 The 20th-ranked Washington Huskies never appeared to be in this game as the Iowa Hawkeyes dominated the first three quarters to win 38-18.

After holding Iowa on its initial series, Washington mishandled the ensuing punt. Sedrick Shaw, who was voted the game’s Most Valuable Player, ran 58 yards for a touchdown, and the Huskies could not recover their equilibrium.

The Hawkeyes went on to score 24 unanswered points, leaving the Huskies scoreless the entire first half. Their contributions led the Huskies to 286 net rushing yards.

Hawkeye running backs Shaw and Tavian banks compiled 135-yards and 122-yards, respectively, to rank as the fifth most successful pair of running backs to compete in the Sun Bowl.

Just as the Iowa Hawkeyes dominated on the field, they dominated the awards.

Iowa’s Zach Bromert also added a pair of field goals, one for 33 yards and the other for 34 yards. Hawkeye kickers combined for five total field goals which is the most made in any Sun Bowl game.

Washington also tied for the most touchdown passes (3) thrown, all completed in second half.