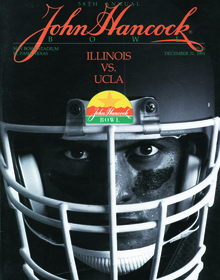 Highly-touted quarterbacks Tommy Maddox of UCLA and Jason Verduzco of Illinois were forced to take a backseat to the tenacious defenses of the Bruins and Fighting Illini.

Because of that, UCLA linebacker Arnold Ale was named the game’s Most Valuable Player, the second linebacker to ever do so in the history of the Sun Bowl. Ale finished with two tackles, two pass break-ups, and one interception.
Defensive lineman Mike Poloskey of Illinois was the Most Valuable Lineman.

Both teams punted on their first drive of the game, then a series of turnovers tainted the first quarter.
The second Illinois possession ended when a Jason Verduzco pass was intercepted by Ale at the goal line and returned for 43 yards.

Able to gain only two yards in three plays, Illinois brought out Forry Wells to punt. UCLA free safety Michael Wells blocked the punt as it rolled out of bounds at the Illinois 24-yard line and was credited with an 18-yard punt return.

With an inability to score touchdowns, place kickers assumed responsibility for putting points on the scoreboard. UCLA kicker Louie Perez made a 32-yard field goal late in the turnover-riddled first quarter, missed his second one of 36 yards in the second quarter and finally made his final one of 19 yards to secure a Bruins win.

Illini freshman Dana Howard finished with a team-high 11 tackles and would become an All-American in 1994. Julyon Brown and Aaron Shelby would contribute 10 tackles and nine tackles, respectively, for the Illini.

Finishing with four tackles, two pass break-ups, and one interception each were Bruin teammates Carlton Gray and Stacey Argo.

Fellow Bruin Jamir Miller finished with three tackles and would become an All-American in 1993.