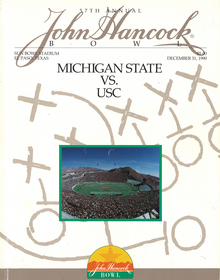 Michigan State became the first Big Ten team to appear in the Sun Bowl and USC made its first-ever appearance as well.

From a statistical standpoint, USC appeared to have the advantage averaging more yards rushing, passing and total offense. However, Michigan State was able to ward off the Trojans with a 17-16 final in front of a sell-out crowd of 50,562 – a then Sun Bowl record.

Michigan State showed the first signs of life as Courtney Hawkins returned a punt for 65 yards to the USC eight-yard line. However, a clipping penalty was called and the ball was returned to the Michigan State 19-yard line. After netting only 3 total yards in three plays, the Spartans punted.

The ensuing USC drive was successful as quarterback Todd Marinovich hit Gary Wellman for the touchdown as the first quarter concluded.

The second quarter fell victim to several penalties, an injury, an ejection, a missed field goal, and two fumbles.

The last fumble proved to have the biggest impact as USC decided on fourth down to go for the touchdown on the one-yard line. Instead, Marinovich lost the ball in the end zone and Spartan Alan Haller recovered the ball.

The touchback allowed Michigan State from its own 20-yard line. With a newfound enthusiasm, the Spartans drove 80 yards in ten plays to tie the game at 7-7.

USC’s Quinn Rodriguez hit a field goal on the first drive of the second half, but Michigan State quickly answered back with a touchdown pass from Dan Enos to Most Valuable Player Courtney Hawkins to give the Spartans a 14-10 lead. On the first play after the kickoff, Freddie Wilson picked off a Marinovich pass and set up a Spartan field goal to increase their lead.

The Trojans attempted to rally in the fourth quarter, but only managed two Quinn Rodriguez field goals (54, 43). USC’s Craig Hartsuyker was Most Valuable Lineman.

The 7.6 television rating was fifth best among 19 bowl games.