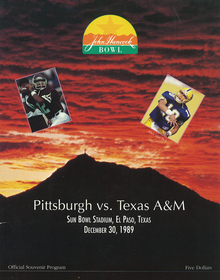 Though each team has played in the Sun Bowl once before, this occasion marked the first time No. 24 Pittsburgh and No. 16 Texas A&M confronted each other in almost one hundred years of football history.

The two ranked teams, no strangers to the holiday bowl season, fought until the end as Pitt rallied behind freshman quarterback Alex Van Pelt’s 44-yard pass to Henry Tuten with 2:01 left to play to give the Panthers a 31-28 win. Van Pelt finished with 354 yards and two touchdowns to earn the C.M. Hendricks Most Valuable Player Award.

The Aggies had previously erased a 24-10 deficit and scored three unanswered touchdowns in the second half, but opted to unsuccessfully attempt a two point conversion on each occasion.

It was evident that Van Pelt would dominate the aerial battle, but the Aggies outrushed the Panthers 252-176 with efforts from Robert Wilson, 16 attempts for 145 yards, and Keith McAfee, 15 attempts for 94 yards.

Pitt’s Van Pelt was inducted into the Legends of the Sun Bowl in 2004 and punter Brian Greenfield earned All-America honors.

The historical battle between the two ranked teams went up against and topped both the Freedom Bowl and Peach Bowl in television ratings.