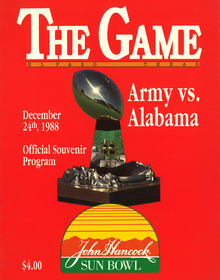 Alabama edged Army 29-28 in the final minutes of the fourth quarter, led by the efforts of David Smith and Derrick Thomas.

The key play of the game occurred with under two minutes to play in the half. With a 14-6 advantage, Army attempted a Keith Walker field goal on the Alabama 24-yard line. However, Derrick Thomas broke through and blocked the kick with 1:47 remaining in the half.

The Tide seemed to rise as Smith completed five passes for 76 yards. Alabama scored its first touchdown of the game with 35 seconds left.

Army refused to back down and quickly drove to the Alabama 27-yard line. Just as the half ended, Walker went to kick and was blocked for the second time by the ferocious Thomas.

In a battle for momentum, the third quarter opened to four scoreless drives before Alabama was able to put some points on the scoreboard with a Smith-Payne connection for 23 yards.

Army quickly responded with the help of a 58-yard run by Ben Barnett that led to a touchdown by Mike Mayweather to regain the lead 21-20.

The next Alabama drive ended with an interception by O’Neal Miller who returned the ball 57 yards for an Army touchdown with seven seconds left in the third quarter.

Unwilling to relent, Alabama rallied back to kick a Phillip Doyle field goal, force an Army punt with a three-and-out defensive stint and score on David Casteal two-yard run to win the game.

Despite the nail-biting intensity the Alabama-Army contest provided, the game drew the lowest television rating to date as it went head-to-head with the AFC wild-card game.

Alabama remains undefeated in the Sun Bowl, with the other wins coming in 1983 against SMU and 1986 against Washington.