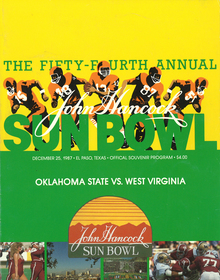 The Oklahoma State and West Virginia game proved to be a shootout setting a then Sun Bowl record for most combined points in a game (68) – a record that would stand until 2005.

A crowd of 43,240 braved the snow, the third and last time snow ever fell during a Sun Bowl game, on Christmas day in 1987 to view No. 11 Oklahoma State (9-2) and its explosive pair of future NFL Hall of Fame running backs – Thurman Thomas and Barry Sanders.

Most Valuable Lineman honors went to West Virginia linebacker Darnell Warren, who returned a 23-yard interception for a touchdown to extend the Mountaineer lead to 24-14 just before halftime. Despite having zero pass completions, the Mountaineers managed 184 total yards of offense compared to the Cowboys 206.

The Cowboys dominated the third quarter scoring two critical touchdowns and holding the Mountaineers to a single field goal.

The first OSU possession of fourth quarter resulted in a Thomas touchdown that would set several records: most carries (33), most rushing touchdowns (4), most touchdowns (4), and most points scored (24). Thomas, an All-American, finished with 157 yards and garnered the C.M. Hendricks Most Valuable Player honors.

West Virginia was able to score a touchdown with 1:20 left in the game but the two-point conversion fell short of the goal line and could not force the tie. The Mountaineers attempted an on side kick but it was recovered by Hart Lee Dykes to preserve a Cowboy victory.

The following year, OSU’s Sanders would go on to win the Heisman, the Maxwell Award and the Walter Camp Award.

Harris would lead West Virginia to a national title the following year. Mountaineer head coach Don Nehlen would be inducted into the College Hall of Fame in 2005.