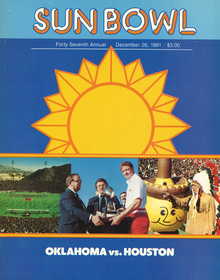 The Sooners, who led the nation in rushing, found a higher gear in the fourth quarter and ran over the Cougars, who came to El Paso with the nation’s third-best defense.

Oklahoma produced the highest scoring fourth quarter in its history and in NCAA bowl history with 30 points in the fourth quarter.

Defensive end John Truitt had an explosive 28-yard interception return to cap off the 40-14 victory for the Sooners.

Oklahoma quarterback Darrell Shepard, who originally went to Houston out of high school, was named C.M. Hendricks Most Valuable Player, as he set the Sun Bowl record for quarterback rushing yards with 107 on 17 carries.

An injury to Buster Rhymes, led the way for freshmen Fred Sims, who rushed for 181 yards on 15 carries. Sims had rushed for just 179 yards during the entire 1981 season for Oklahoma.