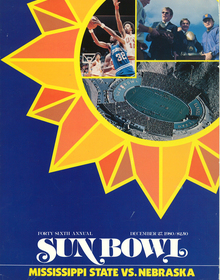 Nebraska’s razzle-dazzle offense was led by quarterback Jeff Quinn, who was named the game’s C.M. Hendricks Most Valuable Player.

Nebraska’s vaunted defense, anchored by defensive end Jimmy Williams, sealed the outcome of this game. The Cornhuskers caused four fumbles, two interceptions, and a muffed punt from which the Bulldogs would never recover.
Nebraska racked up 318 total yards of offense, while the Mississippi State managed a mere 195 yards of total offense on the day.

The Cornhuskers jumped out to a 17-0 lead by halftime.

Mississippi State finally got on the board, when kicker Dana Moore connected on a 47-yard field goal. Nebraska responded with another touchdown, which was matched by the Bulldog offense.

Quinn responded with a 52-yard touchdown pass to Tim McCrady to extend the Cornhusker lead to 21 points, 31-10.

Moore and Nebraska All-American center Dave Rimington were named to the 75th Anniversary All-Sun Bowl Team. Rimington would go on to become the first player to win the Outland Trophy twice (1981 & 1982).

Nebraska head coach Tom Osborne would later win three national championships with the Cornhuskers and be inducted into the College Football Hall of Fame in 1999. He is currently the director of athletics at the school.