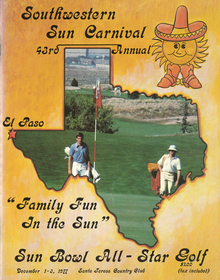 Stanford overcame a 14-10 deficit at halftime to pull out a come-from-behind victory over LSU, 24-10 at the 44th Annual Sun Bowl.

LSU dominated the ground game, rushing for 307 yards, while Stanford proved to be a force in the air, picking up 269 yards passing.

LSU scored on its second possession to set the tone of the game.

Stanford fired back with a touchdown and a field goal for a brief lead before LSU reignited its offense.

With one minute to play before intermission, Alexander plowed into the endzone. Kicker Mike Conway’s successful extra point conversion put the Tigers back on top 14-10.

A crucial turnover by LSU in the fourth quarter surrendered any hopes of a victory. The Tigers were driving on the Stanford 15-yard line when quarterback Steve Ensminger threw an interception on a third-and-twelve.

Stanford linebacker Gordon Ceresino led the Cardinals with a game-high 18 tackles, 14 of which unassisted, and was named Jimmy Rogers, Jr. Most Valuable Lineman.