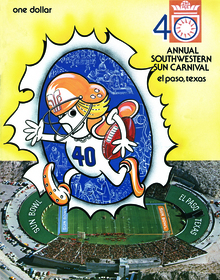 North Carolina and Mississippi State traded score after score all day in a game fondly remembered as the “Fog Bowl” because an overnight snow — although removed from the field — left moisture that turned to steam when the sun came out during the game.

Terry Vitrano of Mississippi State finished the game with 20 carries for 164 yards to earn C.M. Hendricks Most Valuable Player honors. Vitrano capped a 6:29 drive that used most of the fourth-quarter clock with a two-yard plunge into the end zone.

All-American defensive tackle Jimmy Webb was named the game’s Jimmy Rogers Jr. Most Valuable Lineman. Webb registered one of his most critical 12 tackles of the day on a fourth-and-short situation for North Carolina at midfield late in the fourth quarter to preserve the win for the Bulldogs.

On the opening play of the game, Vitrano had a 55-yard, non-scoring run to set up Walter Packer for the first score of the game.

On the field, Mississippi State came from behind three times in the second half to upend North Carolina 26-24.

Mississippi State set a Sun Bowl record for most net yards rushing (455) and most rushing first downs (21). Packer gained 183 yards on 24 attempts and scored twice for the Bulldogs.

The Tarheels executed a strong aerial attack, passing for 125 yards while the Bulldogs could only connect for 44 yards.

Wide receivers Pat Norton recorded two catches for 61 yards and Jimmy Jerome notched two for 42 yards and one touchdown. Running back James Betterson rushed for 84 yards on 19 attempts and had two touchdowns.