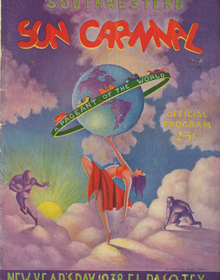 The 1938 Sun Bowl marked the first time, in just four years of existence, that a university from outside the region was invited to play when West Virginia traveled to El Paso to compete against Texas Tech.

After a scoreless first quarter, a turnover early in the second quarter proved costly for Texas Tech.

The Red Raiders received the punt and started the drive from their own five-yard line. On the first play, Barnett fumbled and West Virginia’s Gussie recovered on the three-yard line.

Although the offense started in the red zone, the Mountaineers faced a fourth down decision against a persistent Red Raiders defense.

However, 150-pound David Issac swept to the left, fumbled the ball, scooped it back up, avoided three tackles and dashed into the end zone for the touchdown. Kicker Emmett Moan converted the point after to give West Virginia a 7-0 lead.

Before heading into halftime, Texas Tech was able to rally back with an 80-yard touchdown drive. Leading the effort was quarterback Ed Smith who completed three passes for 48 yards and carried the ball three more times for 12 yards. Charlie Calhoun capped the drive with a one-yard rush for the lone Texas Tech touchdown.

However, the difference in score favored West Virginia as the Mountaineers blocked the extra-point attempt to keep a one-point advantage.

West Virginia’s only loss was to eventual national champion Pittsburgh on Oct. 2 and finished the season 8-1-1. Texas Tech closed out the season 8-4-0. Halfback Harry “Flash” Clarke led all backs with 132 yards rushing. He would have gone over 200 yards, but a 92-yard touchdown run was called back for holding.

This marked the first appearance by Texas Tech, who would would later make eight more trips to become the team with the most amount of visits to the Sun Bowl.