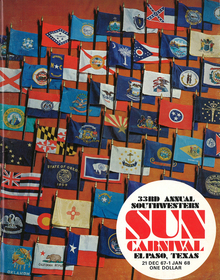 UTEP made its eighth Sun Bowl appearance, but its first as the University of Texas at El Paso. The school was originally known as Texas College of Mines and later Texas Western College.

Fans came out to support the local UTEP that scored a pair of fourth-quarter touchdowns to come from behind and defeat Ole Miss 14-7 in front of a then-record sellout crowd of 34,685 in Sun Bowl Stadium.

UTEP quarterback Billy Stevens won his second Most Valuable Player award (he was 1965 MVP). The Miners’ Fred Carr was named the Most Valuable Lineman.

A 52-yard interception return by Mississippi’s Mac McClure to the UTEP one-yard line set up the Rebels’ only score. Two plays later, Bruce Newell ran to the left and scored to give the Rebels a 7-0 lead after Van Brown kicked the extra point.

A 76-yard drive led by Stevens finished with a five-yard swing pass to flankerback David Karns and was capped with a Jerry Waddles extra point kick to tie the score at 7-7.

In total, the Miners defense held Ole Miss to a mere 109 yards of total offense.

The Rebels represented the Southeastern Conference and the independent Miners would join the Western Athletic Conference the following season.

Stevens, who set a then NCAA record of 52 career touchdown passes, completed 13 of 26 passes for 155 yards against Ole Miss.

Four Miners were taken in the first three rounds of the NFL Draft: Carr and George Daney (first round), Bob Wallace (second round) and Stevens (third round).

With this win, the Miners recorded their record fifth Sun Bowl victory.