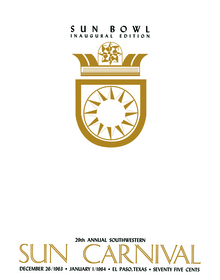 It took close to five years to come to fruition, but Sun Bowl Stadium finally hosted its first Sun Bowl on Dec. 31, 1963. The 30th edition of the game featured Oregon and SMU in front of 18,646 fans in a brand new stadium thanks to El Paso County taxpayers.

The Ducks, coached by legendary Hall of Famer Len Casanova, used offense in the first half and defense in the second half to preserve the Oregon’s first bowl victory in 47 years.

Playing without two-time All-American Mel Renfro, due to a wrist injury, the nation’s fourth-ranked offense vaulted Oregon out to a 21-0 halftime advantage, thanks in part to a pair of H.D. Murphy interceptions. But it was the SMU offense which seized the limelight after the intermission, completing 17 of 28 passes in the final 30 minutes while the Mustangs’ defense limited the Ducks to only four first downs during that same span.

The Ducks built an early lead by capitalizing on the game’s first interception, when Murphy returned a pick 49 yards to the SMU 21. Four plays later Dennis Keller rolled into the end zone from nine yards out. Murphy’s second theft thwarted a potential SMU scoring drive on the Ducks’ three-yard line.

Oregon’s Bob Berry added a pair of second quarter touchdown passes to Dick Imwalle and Paul Burleson to give the Ducks a 21-0 halftime lead.

Oregon defensive back Ron Martin played a major role in the final touchdown, recovering a Mustang fumble at Oregon’s 36 before the Ducks’ junior signal-caller led his team into the end zone with less than a minute remaining before the half.

SMU drove inside Oregon’s 25-yard line three times, but failed to score until the fourth quarter when John Roderick pulled in a pair of touchdown passes. The victory by Oregon was secured when an SMU onside kick rolled out of bounds with 24 seconds to play.

But it was too little, too late. Berry was named the C.M. Hendricks Most Valuable Player after throwing for 145 yards and two touchdowns. Murphy, a two-way star, finished with four tackles, a pair of interceptions and 49 yards rushing on three carries.

But in the end, the biggest significance of 1963 was that the Sun Bowl had a new home. The Ducks defense also featured Pro Football Hall of Famer Dave Wilcox (San Francisco 49ers).