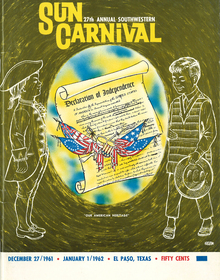 Wichita State did not arrive in El Paso until the 29th because they had been forced to return to Wichita when the plane on which they were flying on developed engine trouble.

Villanova entered the game with the nation’s seventh rated defense and it showed, as the Wildcats held the Shockers to less than 200 yards of total offense on the day.

The tone of the game was set early. Villanova’s defense bottled Wichita up and the offense drove 43 yards on two Billy Joe runs. Joe shook off three Shockers on a 19-yard touchdown run. In 1961, Billy Joe was a terrifying weapon. The 240-pound fullback was also a champion shot putter. While playing for less than half of the game, he would be named C.M. Hendricks Most Valuable Player on the strength of 63 yards on eight carries.

The Villanova defensive line, which outweighed Wichita by an average of 17 pounds a man up front, kept the pressure on all day. They keyed on back, Bill Stangerone and forced four Shocker interceptions. They knocked Alex Zyskowski out of the game with a head injury in the second half. He would not return until the last five minutes of the game.

Villanova led 7-0 throughout most of the first half. With less than three minutes to play, with Stangerone at quarterback, the Shockers drove 47 yards to the Wildcat 18-yard line. Bill Seigle kicked a Sun Bowl record, 36-yard field goal to bring the Shockers to within four at the half.

Villanova got a big break when Richie Ross recovered a fumble on the opening kickoff of the second half at the Wichita 22-yard line. Seven plays later, Louis Rettino dove over from the two-yard line. Ross was named the first-ever Jimmy Rogers, Jr. Most Valuable Lineman.

Later in the third quarter, Villanova’s Sam Gruneisen kicked a 26-yard field goal which made the score 17-3. In the final minutes of the game, Zyskowski returned to lead Wichita on a scoring drive. He hit Adolph Wilson with a 34-yard pass. Zyskowski then swept the end for the score on a five-yard run with 45 seconds remaining.

The game was televised on ABC to a special 70-station network. Former NFL head coach Bill Parcells played linebacker and recorded one kickoff return for 13 yards for Wichita State.