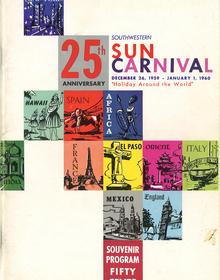 Missouri Valley Conference champion North Texas State was favored heading into the game with its 9-1 record, but the Border Conference runner-up New Mexico State Aggies were ready for the task with its 7-3 mark.

NMSU quarterback Charley Johnson won the first of his two C.M. Hendricks Most Valuable Player awards in this game.
Johnson struck first, when he connected with Pervis Atkins on a 44-yard scoring strike to give the Aggies an early, 7-0, lead.

An unusual play led to NMSU’s second touchdown in the first quarter. Bob Kelly intercepted a North Texas pass and on the return was hit, fumbling at the five-yard line. The ball rolled into the endzone where Billy Ray Locklin recovered for an Aggie touchdown.

The Mean Green got on the scoreboard in the third quarter after finally slowing down the Aggie offense. It was at that point that Billy Christle took a New Mexico State punt 51 yards to paydirt. Robert Duty completed the two point conversion to cut the Aggies’ lead to 21-8.

New Mexico State tacked onto its lead with a 44-yard run by Bob Gaiters to give the Aggies a 28-8 win over North Texas.
Surprisingly, New Mexico State did not have an answer for North Texas’ Abner Haynes, who finished the day with 174 all-purpose yards. Haynes led the Mean Green in rushing and receiving.

NMSU’s Bob Gaiters led all backs with 123 yards on 20 carries.