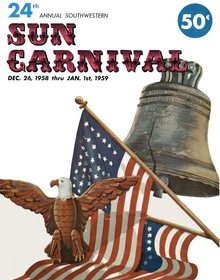 The two teams were coached by a pair of Hall of Famers – “Slingin” Sammy Baugh (HSU) and Bob Devaney (Wyoming).

Turnovers and defense played the biggest part in the game.

After neither team could produce any points in the first quarter, Wyoming took advantage of two Hardin-Simmons’ mistakes to take an early and insurmountable lead.

First, Pete Hart fumbled and Wyoming’s Pat Smyth recovered on the HSU 19. Two plays later, Bud Snyder burst through the center for 22 yards and into the end zone.

Wyoming kicked off and HSU returned the ball to their own 21 yard line. On first down, Gene Uccellini was tackled for a loss of seven.Then, on second down, quarterback Harold Stephens threw a pass that was intercepted by Leonard Kuczewski. That turnover led to a Bud Snyder touchdown as he pummeled through the goal line from the three-yard line.

HSU answered with a third-quarter scoring strike from Stephens to Benji Lipsey to cut the lead to eight, but that was as close as they would get.

Wyoming held one of the nation’s most prolific passing teams to just 82 yards passing and just 235 yards of total offense.

Ironically, HSU held Wyoming to just 188 yards of total offense, but turned the ball over four times to the Skyline Champions.