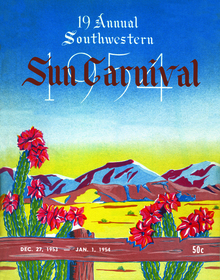 Southern Miss entered the game 9-1-0 with a win over nationally-ranked Alabama, which some called the greatest upset in 40 years. The Eagles were ranked as high as No. 17 in the nation at one point in the season and overwhelming favorites heading into the Sun Bowl.

Texas Western came into the contest with a 7-2 mark. TWC’s quarterback, Dick Shinaut, was involved in 19 of his team’s 37 points. Not surprisingly, he was named the first-ever C.M. Hendricks Most Valuable Player.

The Miner’s Clovis Riley could just as easily have been named MVP. He had a 55-yard non-scoring run in the first quarter and a 43-yard touchdown run in the third. He finished the day with 112 yards rushing on 12 carries.

Texas Western got on the board on the second play of the game, when Riley darted 54 yards where he was hit and fumbled. The ball was recovered in the end zone by TWC’s John Howle for a Miner touchdown. The play was set up by a 48-yards kickoff return by Shinaut to open the game.

On its next possession, Shinaut executed a perfect screen pass to Jesse Whittenton, who darted down the sideline for a 25-yard score.

The two teams traded scores in the third quarter, before the defenses took over and put the game in cruise control.
Southern Miss’ longest play from scrimmage was a Billy Jarrell to Hub Waters, 56-yard, non-scoring pass.