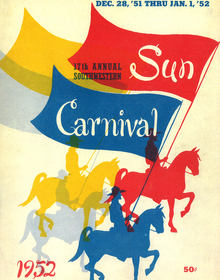 Offenses prevailed early, as both teams traded scores, but then Texas Tech took control of the game. Lewis Crossley closed out a six-play drive when he connected with Jerry Johnson on a 19-yard scoring strike, giving the Red Raiders a 13-7 lead.

On Texas Tech’s next possession, Junior Arterburn added to the lead with a five yard run. The point-after attempt went wide, giving Tech a 19-7 lead.

Pacific answered with a nine-play drive, capped by a one-yard run by Johnny Cobb, cutting the Red Raider lead to five, 19-14, heading into the half.

Texas Tech added its fourth touchdown of the game midway through the third quarter, when Charles Welton found the end zone from 11 yards out.

From that point on, defense took over, as neither team was able to get into the red zone in the fourth quarter.

Eddie Macon of Pacific, the first African-American to play in the Sun Bowl, had a 47-yard non-scoring run in the first quarter. Macon finished the game with 60 yards on six carries. He was one of three Tigers to rush for 60 yards in the game, joining Cobb (17-67) and Art Liebscher (15-60). Another Pacific running back, Doug Scovil, would go on to become the head coach at San Diego State.

Jim Turner led all rushers with 78 yards on eight carries, including the game’s opening score on a 39-yard scamper. Bobby Cavasos added 69 yards on 10 carries and Johnson picked up 48 yards on seven carries.
Though Texas Tech gained six fewer first downs than Pacific throughout the game, the Red Raiders went on to win 25-14.

This game marked the first and only time Texas Tech would win the Sun Bowl trophy in nine attempts.