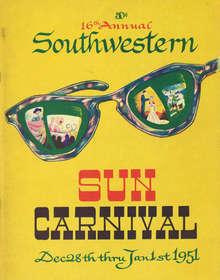 West Texas State (9-1) was able to edge out Cincinatti (8-3) 14-13 on account of a missed extra point in the second quarter that was blocked.

The Buffaloes recorded the first touchdown of the game when Bill Cross rushed three yards and Roy Lee Dunn added the extra point for a 7-0 lead.

Cincinnati fired back with several key passes from quarterback Gene Rossi. Then, standout Dan McKeever was injured on a rush. His brother replaced him and ran three straight plays with the final resulting in a touchdown.

However, kicker Jim Kelly’s extra-point attempt was blocked by WTSU’s Don Briggs and proved to the deciding factor of the game.

The Bearcats pounced on the first lead of the game in the third quarter when Rossi completed a 17-yard pass to Bob Stratton. Bill Shalonsky added the extra point.

Then, on a fourth-and-long play, West Texas State’s Frank Wise lined up for a punt but instead of kicking the ball, he threw a right lateral into the hands of quarterback Gene Mayfield. Mayfield proceeded with a pass to Bill Cross who was near the Cincinnati 40-yard line. Cross broke several tackles and found the endzone. Roy Lee Dunn kicked the successful extra point.

West Texas State rallied back driving 79 yards. The Bearcat defense came alive and held the Buffaloes on a fourth-and-one play on the Cincinnati one-yard line.

The Bearcats came as close at Buffaloes’ 27-yard line, but Rossi was sacked twice as the game ended.