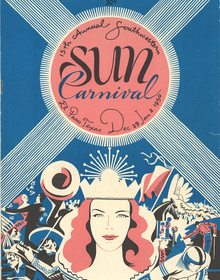 In their third appearance in the Sun Bowl, Texas Western College (now UTEP) recorded its first win on Jan. 2, 1950, when the Miners upended Georgetown University, 33-20, in the 15th edition of the game.

For the second straight year, TWC entered the Sun Bowl as the nation’s leading rushing team. In 1949, the Miners averaged 333.2 yards per game on the ground and surpassed that average against Georgetown, as Texas Western racked up 348 yards on the ground.

The Miners shut down the Hoyas in the first half, taking a 13-0 lead. Bill Chesak capped a 32-yard drive with a one-yard touchdown rush to put the Miners one scoreboard first. Then, the Miners took advantage of a fumble on the Georgetown 23-yard line to set up Harvey “Pug” Gabrel, the team’s leading yardage gainer, for another one-yard touchdown run before the first half expired.

In the second half, the two teams traded touchdowns point for point.

First to attack was the 5-7, 165-pound Dan Fraser as he spun through the middle for a 31-yard touchdown and Jim Davis added the extra point kick for a 20-0 Miners lead.

Jack Kivus gave the Hoyas their first score with a five-yard touchdown run and a successful Dick Haesler extra point attempt to made the score 20-7.

In the fourth quarter, Miner Jim Hammond picked off a Georgetown pass and returned it to the Hoya 19. Gabrel followed with a run into the endzone, but Davis’ kick was blocked.

After back-to-back punts, the Hoyas capitalized on a 41-yard return by Gus Forniciari and two big penalties against the Miners with a 14-yard Frank Mattingly-Harry Schmitt touchdown pass.

Texas Western countered with a 53-yard onside kick return for a touchdown by center Wayne Hansen, followed with a Jim Davis kick to extend the lead to 33-13.

With only ten seconds remaining in the game, quarterback Bob Deacon launched a desperation pass to Gus Fornaciari who ran the ball into the endzone. Haesler tacked on the extra point to end the game in a losing effort 20-33 to the Miners.

TWC’s Lee Cargile picked up 96 yards rushing on 12 carries, while teammate Pug Gabriel added 85 yards on 11 carries and a pair of touchdowns. Georgetown’s Gus Fornaciari caught four passes on the day for 114 yards. He had one catch for 41 yards and another for a 43-yard touchdown in the final moments of the game.