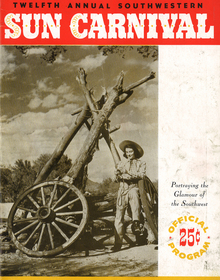 In both teams’ first official post-season bowl game, Virginia Tech and Cincinnati played through the snow. This also marked the first time the Sun Bowl did not feature a team from the region. A rare winter occurrence, this was also the first Sun Bowl played in the snow and both teams struggled offensively in the first half.

Virginia Tech had the best chance to score of either team in the first half when it drove to a first down inside the Cincinnati two-yard line late in the first quarter. On four straight running plays, however, the Bearcats’ defense held, and Virginia Tech was denied a scoring opportunity.

Cincinnati went on to score three touchdowns in the third quarter and Virginia Tech blocked the extra point each time.

Cincinnati received the second half kickoff and drove 75 yards for the first score of the game, highlighted by a 52-yard Allen Richards run and 13-yard Harold Johnson touchdown run. The Bearcats managed to overcome two 15-yard penalties and one five-yard penalty.

Virginia Tech cut the lead to 12-6 early in the fourth quarter when Ralph Beard capped off a 55-yard drive with a three-yard touchdown run.

Johnson emerged as the defensive leader for the Bearcats, intercepting a pass in the endzone late in the third quarter to stop a potential game-tying drive.

Late in the fourth quarter, the Hokies drove into Cincinnati territory, but Johnson caught his second interception. Johnson was able to run all the way out to the Hokies’ 25-yard line.

Three plays later, Don McMillan scored on a quarterback sneak from three yards out to produce the final score of 18-6.

Cincinnati’s vaunted running attack produced a total of 369 yards as the Bearcats piled up 463 yards of total offense and finished the season 9-2.

Virginia Tech managed 13 first downs – just three less than UC – despite gaining only 34 yards on the ground and 85 through the air.

During the 1946 season, Kitts’ team defeated the No. 12 N.C. State Wolfpack for the first win over an Associated Press Top 25 team in school history. The Hokies traveled to El Paso without star halfback and punter Bobby Smith, who had been injured in Virginia Tech’s final regular-season game.