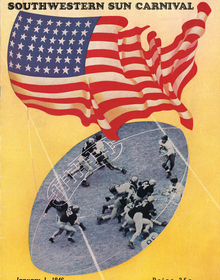 It was sunny and 70 degrees when New Mexico halfback Don Rumley rushed for one touchdown and threw three more in the highest scoring Sun Bowl to date.

With the win, New Mexico ended two years of non-scoring frustration in the Sun Bowl and became the first collegiate “home team” to win the classic. It also marked the end of the 10-year losing streak for the Border Conference.

It truly was a game within games, as Denver dominated the first quarter to take an early 10-0 lead.

Denver, the Mountain States Conference Champion, recorded the first field goal in Sun Bowl history, when George Miller connected on a 28-yarder in the first quarter.

New Mexico battled back to gain the lead with a 65-yard interception return for a touchdown and a nine-yard run by Rumley.

Denver drove the field to open the third quarter and regained the lead, 17-13, behind John Adams’ two-yard scamper into the end zone.

But then Don Rumley went to work, as the UNM signal caller connected with Dick Moser on a 37-yard scoring pass and a 47-yard TD reception. Moser became the first player to have two receiving touchdowns in a Sun Bowl game.

Moser, who is really Bill Moseley, admitted in 2007 that he had played under an assumed name in order to preserve his eligibility at Kentucky.

Moser then connected with Julian McDonald on a 28-yard scoring strike to run the Lobos lead to 34-17. Karamigios answered with his second touchdown of the game, when he pulled in a 35-yard touchdown pass from Vernon Cochran, but it was too little, too late.