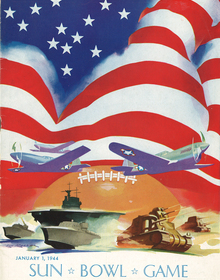 Conference play was scarce in 1943, as most schools had discontinued football due to World War II. Southwestern University was a football powerhouse during the war years because of the U.S. Navy training program on campus.

Many of Southwestern’s best players came from schools within the Southwest Conference resembling an all-star team.

The Southwestern Pirates entered the game as an independent with an 8-1-1 record, including a 14-7 win over No. 11 Texas.

Due to the war, New Mexico played a sparce schedule and came to El Paso with a 3-1-0 mark.

Southwestern elected to kick off to New Mexico and Bill Jourdan received the ball on the five, fumbled, recovered and carried the ball to the Lobo 23-yard line. But the drive stalled.

R. L. Cooper of Southwestern had a 61-yard, non-scoring run in the second quarter. He gave the Pirates a scoring threat deep in New Mexico territory, but the time ran out in the half before Southwestern could score.

Southwestern took over possession on their own 22-yard line to open the fourth quarter when New Mexico lost the ball on downs. Southwestern came as close as the nine-yard line, but an incomplete pass, a sack for eight yards and a completed pass for a loss of 11 yards followed. Harold “Spot” Collins attempted a field goal from the 34-yard line but the kick fell short and wide from the uprights.

On the next drive, New Mexico failed to convert a first down and punted the ball.

The stingy Pirate defense held New Mexico in check, as the Lobos only managed 48 total yards and four first downs on the day. It was the second lowest total in NCAA bowl history to date. The Lobos threatened only twice during the second and third quarters.

The rushing efforts of Southwestern accounted for 214 of the 279 total offensive yards gained throughout the game.

Southwestern also had eight more first downs than New Mexico for a total of 12.