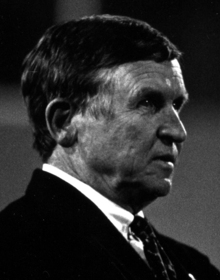 Johnny Majors graduated from Tennessee in 1956 where he was an All-American tailback, UPI’s Back of the Year and second to Notre Dame’s Paul Hornung in the Heisman Trophy balloting. He was twice named MVP in the SEC, and in 1975 he was named to the 25-year All-SEC Team. He is a charter member of the Tennessee Hall of Fame. He turned a downtrodden Iowa State program around and in just five years took the Cyclones to their first two bowl games in history (one of them being the 1971 Sun Bowl). In 1973, Majors began his first of two stints at the University of Pittsburgh where he reached the pinnacle of his coaching career. In just four seasons, he transformed Pitt’s struggling football program into the 1976 national champions. Under his leadership the Panthers went to three bowl games, one of which was the 1975 Sun Bowl. He was twice named National Coach of the Year. He returned to his alma mater in 1977 to help rejuvenate a stagnant Tennessee football team, quickly revitalizing the Vols into an SEC and national power. In 16 years at Tennessee, he led teams to 11 bowls. One of those was the 1984 Sun Bowl, making him one of only three coaches to appear in three Sun Bowls.