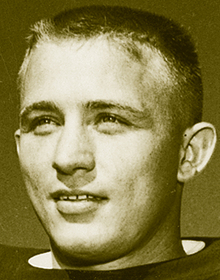 Charley Johnson played collegiate football at New Mexico State University where he quarterbacked the Aggies to two winning appearances in the Sun Bowl in 1959 and 1960. He was the first two-time C.M. Hendricks Most Valuable Player. He completed 7-of-15 passes for 124 yards and two touchdowns and rushed seven times for 31 yards at the 1959 Sun Bowl … One year later, he capped an undefeated season by completing 18 of 26 passes for 190 yards and two touchdowns in the 1960 Sun Bowl. Charley graduated from NMSU in 1961 with a Bachelor of Science Degree and subsequently earned his Master of Science and Doctor of Science in Chemical Engineering at Washington University in St. Louis, Missouri. Charley played 15 years in the NFL with the St. Louis Cardinals, Houston Oilers, and Denver Broncos. While in professional football, he served as Team Captain for both the Oilers and the Broncos. He was also a pro-bowl quarterback in 1963 while a member of the Cardinals. His No. 33 jersey in the only retired number in Aggie history.