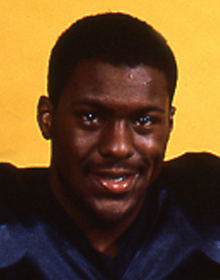 Before there was Michael Vick, there was Major Harris.
Harris was one of college football’s most exciting players to watch in the late 1980s. A three-year starter at quarterback, he became the first player in NCAA history to rush for more than 2,000 and pass for more than 5,000 yards in a career.

Coming to Morgantown at a time when West Virginia was coming off consecutive bowl-less seasons, the Pittsburgh native ignited a flame in the West Virginia football program.

After struggling through the early part of his redshirt freshman season, the elusive signalcaller had a breakout game against East Carolina in 1987 and never looked back. He produced 1,200 yards passing and 615 rushing yards in helping West Virginia to a John Hancock Sun Bowl berth against Thurman Thomas-led Oklahoma State.

It was a back and forth Sun Bowl that was dubbed the Snow Bowl, as the two teams battled on a unusual snowy Christmas Day in El Paso. There were two ties and three lead changes during the game, but the game came down to West Virginia’s final drive.

With 5:13 to play, Harris engineered a 10-play, 58-yard, four-minute drive that culminated with Craig Taylor’s six-yard jaunt into the end zone with just over a minute left. The Mountaineers ran on every play of the final drive, with Harris carrying the ball four times for 32 yards, including a pair of fourth-down conversion runs for the signalcaller.

Trailing 35-33 to Oklahoma State, College Football Hall of Fame head coach Don Nehlen called for a pass on the two-point conversion. Harris rolled out and completed the pass to tight end Keith Winn, but Oklahoma State’s Shawn Mackey stopped Winn short of the goal for the Cowboy win. The game was ranked the third best Sun Bowl of all-time.

Harris and Anthony Brown became the fifth duo to rush for 100 yards in a Sun Bowl game, as Brown racked up 167 yards and Harris finished with 103.

The following season, Harris was nearly perfect in directing West Virginia to the school’s first-ever undefeated, untied regular season and a matchup against No. 1-ranked Notre Dame in the Fiesta Bowl for the national championship.

In getting the Mountaineers there, Harris baffled opponents all season with his daring, unpredictable, wide-open style. That was never more evident than in West Virginia’s 51-30 dismantling of long-time nemesis Penn State. Harris outgained the entire Penn State team, 301-292, and produced the school’s most exciting run ever in the first quarter of that game.

As the play clock wound down, Harris forgot the play he had called in the huddle. As soon as the ball was snapped, the entire West Virginia team went in one direction and Harris went the other.

He faked out the entire Penn State team leaving no less than seven tacklers grabbing air on the way to the most gorgeous touchdown run in school history – a mere 26-yards forever embedded in the memories of West Virginia football fans.

That run and several more like it helped him finish fifth in the Heisman Trophy race that year and earn ECAC Player of the Year honors.

As a junior, Harris was equally spectacular despite not having as strong a supporting cast. He passed for 2,058 yards and rushed for 936 yards to finish third in the 1989 Heisman Trophy balloting. He earned first team Kodak All-America honors and was a second team AP and Football News All-American. Like 1988, Harris was again voted ECAC Player of the Year.

He established a then-West Virginia record with 7,334 total yards and became one of just two quarterbacks in Division I history to pass for more than 5,000 yards and rush for more than 2,000 yards.

After the completion of his junior year, Harris left school early and was drafted in the 12th round by the Los Angeles Raiders, though he would never play a down in the NFL. Instead Harris played one season in the Canadian Football League with the British Columbia Lions before spending parts of the next five years in the Arena Football League.