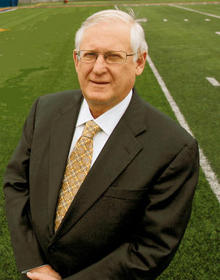 Gerald J. Rubin is the 26th member of the Sun Bowl Association’s Legends of the Sun Bowl, but the first member who is not a former player, coach, CBS Sports personnel or game administrator. But his contributions to the legacy of the Sun Bowl and the City of El Paso are everlasting, as he and his company Helen of Troy signed on to be the game’s title sponsor in December, 2003.

Rubin’s devotion to the community that he grew up in is seemingly unwavering and that was no truer to form than when the founder, chairman, CEO and president of Helen of Troy stepped in to sponsor the Sun Bowl after it had lost its title sponsorship.

But his personal contribution to the game goes back more than 25 years, as he has seen that every player during that span has left El Paso with one of his trademarks – the hairdryer.

Rubin formed Helen of Troy in 1968, originally as a seller of hair wigs, but the company has evolved into one the world’s leading distributors and marketers of consumer and personal care products. Helen of Troy’s products include hairdryers, curling irons, straighteners, clippers and other electrical hair – care products sold under such well-known names as Revlon, Vidal Sassoon, Sunbeam and Bed Head. The company also sells a number of products to the professional hair-care trade. He has also added OXO to the product mix.

In the 1980s, Rubin’s daughter Kari was named the Association’s Sun Queen. It was not long after that Rubin began providing hairdryers for the team gift packages for the Sun Bowl and it has been a staple ever since. Over 6,000 players and coaches have left El Paso with a Helen of Troy made hairdyer for more than 25 years. It is very fitting considering that Helen of Troy is the largest producer of hairdryers in the United States.

For years, Helen of Troy has been El Paso’s premier corporate citizen, donating significantly to more than 400 charities each year. Its sponsorship of the Brut Sun Bowl is just one example of Helen of Troy’s commitment to doing good things for the El Paso community.

For the first two years of the sponsorship, the game was the Vitalis Sun Bowl, promoting Helen of Troy’s newly acquired men’s hair care product line.

The game’s name changed to the Brut Sun Bowl in the 2006, when Rubin and Helen of Troy extended the sponsorship through the 2009 edition of the game.

His generosity has gone beyond the game itself, and for the last six years he helped implement the Helen of Troy Halftime Show to the game day experience, which has brought in artists like Los Lonely Boys, Diamond Rio, Rihanna and this year’s David Archuleta. He also saw the implementation of giveaways such as Vitalis product and the Brut Sun Bowl caps. He also provides sample bags each year at the Rotary Sun Bowl Team Luncheon for the visiting fans.