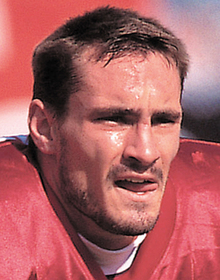 A mainstay on the Arizona State University defense, Pat Tillman was a standout with both Sun Devils and the Arizona Cardinals. In 1997, He led the No. 16 Sun Devils to a 17-7 win over Iowa in the 1997 Sun Bowl as a senior. In his final collegiate game at the 1997 Sun Bowl, Tillman recorded eight tackles (four solo), a half a sack, with one pass breakup and three quarterback hurries, as the ASU defense held Iowa to 209 yards of total offense on the day. Tillman was named the Pac-10 Defensive Player of the Year, first team Academic All-American and Sporting News first team All-American after recording 97 tackles from his linebacker position in 1997. After being selected in the seventh round of the 1998 NFL Draft, Tillman played his way into the starting strong safety position his rookie year. He played four seasons in the NFL and set a club record for tackles in 2000. As a free agent in 2001, Tillman was offered a five-year $9 million contract with the St. Louis Rams. He re-signed with the Cardinals at a smaller offer sheet out of loyalty to the team that drafted him. A year into that contract, Tillman made an unprecedented decision and walked away from his current three-year $3.6 million deal to join the United States Army. Sources close to Tillman said he was greatly affected by the terrorist attacks on the U.S. on Sept. 11, 2001, and this prompted his decision to enlist. Tillman was a specialist in the 75th Ranger Regiment, a light infantry unit out of Fort Benning, Ga. He died on Apr. 22 while serving on a mission in Southeastern Afghanistan near the village of Sperah.