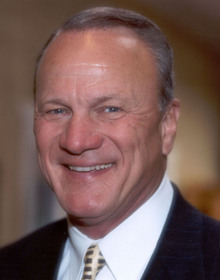 A 2001 College Football Hall of Fame inductee, Barry Switzer led the University of Oklahoma to a 40-14 victory over Houston in the 1981 Sun Bowl. In his 16 years at OU (1973-1988), Switzer compiled a 157-29-4 record. He is ranked first in winning percentage (.837) in Oklahoma history, and the winning percentage also ranks as the fourth-best in NCAA Division I history. Switzer led Oklahoma to three national titles: 1974, 1975 and 1985. Under Switzer, the Sooners earned 12 Big-8 Conference Championships and won eight bowl games of 13 bowl appearances. Switzer was named head coach of the Dallas Cowboys in 1994. He led Dallas to the 1996 Super Bowl title. Switzer is one of only two coaches who have won national championships in both the NCAA and the NFL. A native of Arkansas, Switzer graduated from the University of Arkansas in 1960. He was captain of the 1959 Razorbacks team, which claimed the Southwestern Conference title and Gator Bowl title. In 1966, Switzer joined the Oklahoma coaching staff as offensive line coach, and he was named head coach of the Sooners in 1973. He is a member of the Oklahoma and Arkansas Sports Halls of Fame and has been honored by the Walter Camp Football Foundation, Big 8 Conference, NCAA, Washington Pigskin Club, The Sporting News, Playboy, Associated Press and United Press International. He is the founding organizer of the Swing for Sight Golf Tournaments, which have raised hundreds of thousands of dollars for the Society for the Prevention of Blindness. For the past 25 years, he has also contributed his time to the Oklahoma Special Olympics.