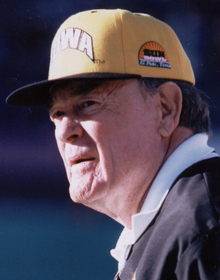 Hayden Fry led three teams to the Sun Bowl during his coaching career—Southern Methodist in 1963 and Iowa in 1995 and 1997. At the time of his retirement following the 1998 football season, Fry was only the sixth man in history to coach football 20 years or more at a Big Ten school, and he was the fourth winningest active coach in the NCAA. He also ranked 10th in all-time Division I victories (232). He is the winningest coach in Iowa history. During his 20 years at Iowa, Fry compiled a 143-89-6 record and led his teams to 14 bowl appearances. He led the Hawkeyes to three Big Ten titles and three Rose Bowl appearances. Fry was voted Big Ten Coach of the Year three times (1981, 1990, 1991) and was named Coach of the Year (regionally and nationally) by both the American College Football Coaches Association and the media. Some of Fry’s other honors include his selection to the Holiday Bowl Hall of Fame, the Texas High School Football Hall of Fame and the Texas Sports Hall of Fame. He is the recipient of the Robert R. Neyland Memorial Trophy, the Johnny Vaught Lifetime Achievement Award and the Baylor University Distinguished Alumni Award.