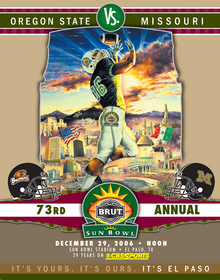 Oregon State was favored heading into the 73rd Annual Brut Sun Bowl, but it took two late scores and a gutsy play to secure a 39-38 win over Missouri.

After securing the game-tying score with 23 second left, OSU head coach Mike Reilly decided to go for the two-point conversion during the time out. Yvenson Bernard converted the try to give the Beavers the one-point margin of victory.

It seemed improbable with Missouri leading by 14 points with 12 minutes to play in the fourth quarter, but Matt Moore engineered a pair of seven-play scoring drives that resulted in touchdown passes to Bernard and Joe Newton.

Moore was named the C.M. Hendricks Most Valuable Player, after completing 31 of 54 passes for 356 yards and a Sun Bowl record four touchdowns. In all, Moore accounted for 30 of OSU’s 38 points – one rushing and four passing touchdowns.

Prior to Moore’s game-saving touchdown, it seemed that the Tigers’ Tony Temple was destined for the games top honor. Temple carried the ball 20 times for 194 yards and two touchdowns. At the time, it was the second best Sun Bowl performance ever.

Missouri quarterback Chase Daniel was also on target, as he completed 16 of 29 passes for 330 yards and two touchdowns. He finished the day with a quarterback rating of 173.52, which is the highest ever in a Sun Bowl when attempting 20 or more passes.

When it was all said and done, the two teams combined for a Sun Bowl record 1,018 yards of offense on the day.