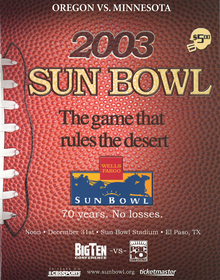 The fifth largest crowd in Sun Bowl history watched as No. 17 Minnesota’s Rhys Lloyd kicked a 42-yard field goal with 23 seconds left to give the Golden Gophers a 31-30 win over Oregon.

The scoring battle had been in Oregon’s favor when Jared Siegel (3-3 in PAT’s and 3-3 in field goals) booted a 47-yard field goal with 4:16 left in the fourth quarter, minutes before the 55-yard drive that would result in a Minnesota victory.

Oregon would use two timeouts in an attempt to gain sophomore quarterback Kellen Clemens’ focus, but threw his first interception with 10 seconds left in the game as an Oregon win slipped from their grasp.

It was a reversal of fortune in the post-game ceremonies, as Oregon swept all three trophies. In 1999, Oregon won the game and Minnesota won all three awards. Oregon WR Samie Parker was named the C.M. Hendricks Most Valuable Player after recording 16 catches for 200 yards, setting Sun Bowl records in both categories. Oregon DT Junior Siavaii was named the Jimmy Rogers, Jr. Most Valuable Lineman and Oregon PK Jared Siegel was named the John Folmer Most Valuable Special Teams Player.

Minnesota, ranked third nationally in rushing (293.2 ypg), dominated as Laurence Maroney gained 131 yards, more than the total combined yardage for Oregon (117). Maroney would go on to play with the New England Patriots while teammate Marion Barber would make an immediate impact with the Dallas Cowboys.