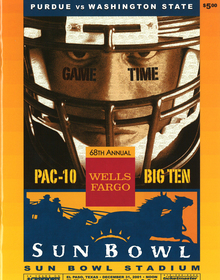 Purdue scored with 1:53 left in the game and recovered an onside kick on the Purdue 49 in an attempt to win in the final moments of the game. However, the Boilermakers lost possession on downs and the Cougars regained the ball on their own 22 with 1:17 left.

WSU kicker Drew Dunning earned the John Folmer Most Valuable Special Teams Player Trophy. Dunning tied the Sun Bowl record for most points kicking with 15 and also tied for the most field goals made with four (30, 34, 37, 47).