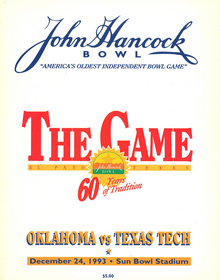 Three touchdown passes by the game’s Most Valuable Player, Oklahoma senior quarterback Cale Gundy, pushed the Sooners to a 41-10 victory.

The first two quarters found Texas Tech in a position of fighting back to win. An OU 78-yard punt by senior Scott Blanton, a Sun Bowl record, didn’t help the Red Raider cause.

However, Oklahoma’s defense battled back as Tyrell Peters (11 tackles), Mike Coats (eight tackles) and Darrius Johnson (seven tackles) all finished with one interception each. Sophomore Cedric Jones finished with six tackles, reaped All-American honors in 1995, concluded with the OU career records in sacks (31.5) and tackles for loss (46.5) and was drafted as the fifth pick overall by the New York Giants in 1996.

All-American Byron “Bam” Morris finished with 95 yards, was second in the nation in most yardage per gain, became Texas Tech’s single-season TD rusher (22), received the Doak Walker Award in 1993 as the top running back in college football, and was drafted in 1994 by the Pittsburgh Steelers. Teammates Lloyd Hill and Derrell Mitchell were also drafted in 1994.

Linebacker Zach Thomas garnered All-American honors and finished with 15 tackles (seven for a loss, six unassisted and two sacks) for Texas Tech and was drafted by Miami in 1996. Drafted by New York in the same year was Marcus Coleman, who finished with five tackles and one interception.

Possession proved to have a large impact as the Red Raiders only had the ball for 24:38 and the Sooners commanded the pace of the game with 35:22.