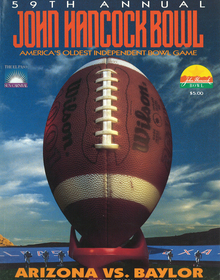 Baylor’s first appearance at the Sun Bowl would also be head coach Grant Teaff’s final game. The College Football Hall of Fame coach was inducted into the Legends of the Sun Bowl in 2006.

Two long touchdown receptions (tying the Sun Bowl record) by the game’s Most Valuable Player, Melvin Bonner, against the nation’s number one defense proved to be the difference in a hard-fought contest that saw Baylor rally from a first half deficit. Bonner finished with five receptions for 166 yards.

The Wildcats, infamous for their “Desert Swarm” defense, were led by consensus All-American and Most Valuable Lineman Rob Waldrop.

Although Baylor won the game, Arizona netted 418 yards of offense, racked up 282 yards passing and 136 yards rushing. Baylor managed only 249 yards of offense and overcame a 13-7 deficit at the intermission.

Baylor received the kickoff to open the second half with good field position after Arizona was flagged 15 yards for a personal foul. Then, Bonner broke a tackle and sprinted 69 yards for the touchdown to give the Bears the lead 14-13 following a Rhett Delaney extra point kick.

Baylor extended the lead by capitalizing on two fumble recoveries with a pair of field goals in the fourth quarter by Trey Weir to extend the lead to 20-13.

Deep in their own territory, Baylor’s Delaney prepared to punt the ball but fell down in the end zone to give Arizona a safety with 31 seconds remaining in the game.

Arizona desperately and almost successfully drove to the end zone to steal the win, but could only reach the Baylor 28-yard line. Wide receiver Heath Bray almost caught a pass thrown by quarterback George Malauulu in the end zone, but it was incomplete. Time expired and the final score was 20-15 in favor of Baylor.

Wildcat kicker and All-American Steve McLaughlin would later go on to win the Lou Groza award.