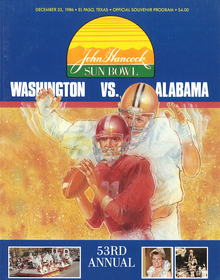 After a scoreless first quarter, Alabama’s Bobby Humphrey broke a tackle near the line of scrimmage and sprinted 64 yards for the first score of the game in the second quarter.

The Huskies responded with two Jeff Jeager field goals from 31 yards and 34 yards to close out the first half.
Henceforth, the Crimson Tide dominated the game.

Quarterback Mike Shula connected with Greg Richardson for a 32-yard touchdown to extend the lead to 14-6 to open the third quarter.

Two drives later, Shula led the Tide down the field again. This time he connected with Humphrey for an 18-yard touchdown strike to extend the lead to 21-6.

Driving 92 yards on the first possession of the final quarter, Alabama secured the win with another touchdown by Humphrey, who finished with three touchdowns and 202 all-purpose yards.

The C.M. Hendricks MVP Award was given to Cornelius Bennett, Alabama’s All-American defensive end, who finished the game with 11 tackles (seven of them unassisted) and one sack.